Ace is a performance piece about sex. Kind of, it’s about a lot of things. Sex is just the instrument to explore those things.

Written by Sasha Danswan and directed by George Kempson, ‘Ace’ spans ninety minutes, as Sasha moves through different sex positions, while a voiceover describes her past experiences, with lovers and her changing sense of self. Sasha describes the piece as a hybrid performance, a cross between an art museum and a theatre piece. It’s an apt description.

Originally from Australia, Danswan moved to the UK in 2018, to study Drama, Theatre and Performance at Sussex. Post-graduation, Danswan wrote and developed ‘ACE’ based on journal entries written during lockdown.

In early October, I sat down for an interview with Danswan, a day before ‘Ace’ opened at The Actors.

How did you decide on the subject of this piece?

During COVID, I started writing journals again. I was writing words on a page, as a way to force myself to recall past experiences with people and with myself. Once I started I couldn’t stop writing or thinking. I realised that I was really misogynistic in how I was viewing sex, I never put myself in it, and it made me angry – I went to a girls’ school and popularity for us was how many boys you knew – I think it’s why it took me so long to realise. I saw them (boys) as so important for so long that I mistook it for attraction. But then a lightbulb went off in my head. “Oh my god, I’m asexual” – It was so obvious, but it’d never clicked until then. Because I’d never properly thought about my own view of sex and attraction.

How much has ‘ACE’ changed from its original form?

The journal entries became poems. I recorded myself reading them out loud, and the performance is me speaking through a voice-over, while I cycle through ten different sex positions. It becomes an endurance piece, because I’m holding these positions without a partner, it’s physically straining – feels like forcing yourself to do something you don’t really want to do but you’re supposed to because it’s “healthy for you.” I could just go for a run instead.

How did you arrive at deciding to do a performance piece, instead of a traditional theatre show?

One of the things I’ve learnt, and still surprises me, is just how vulnerable people can be on stage. And I wanted my piece to be that. The style of this is more performance art, I wanted to create a hybrid between an art museum and a theatre piece. Dan (Kempson) and I agreed that it should be more like performance art, where we could reinvent the space and create our own rules and our one rule ended up being “Don’t Touch the Performer”, we really wanted people to experience the piece however they’d like to.

Did anything change for you, post-realising your asexual identity?

I’ve had to rethink a lot of things, and it’s forced me to stop practicing behaviours like compulsive heteronormativity, centring men and romantic relationships – all of the things I do without knowing why. I’ve also had to do a lot of thinking about asexuality as a queer identity, and how I fit into the wider queer community.

What do you hope people get out of seeing ‘Ace’?

I always hope that people are able to find books, plays – just any entertainment that makes them go “thanks for letting me know that about myself”, and if my piece could be one of those, I’d be thrilled. 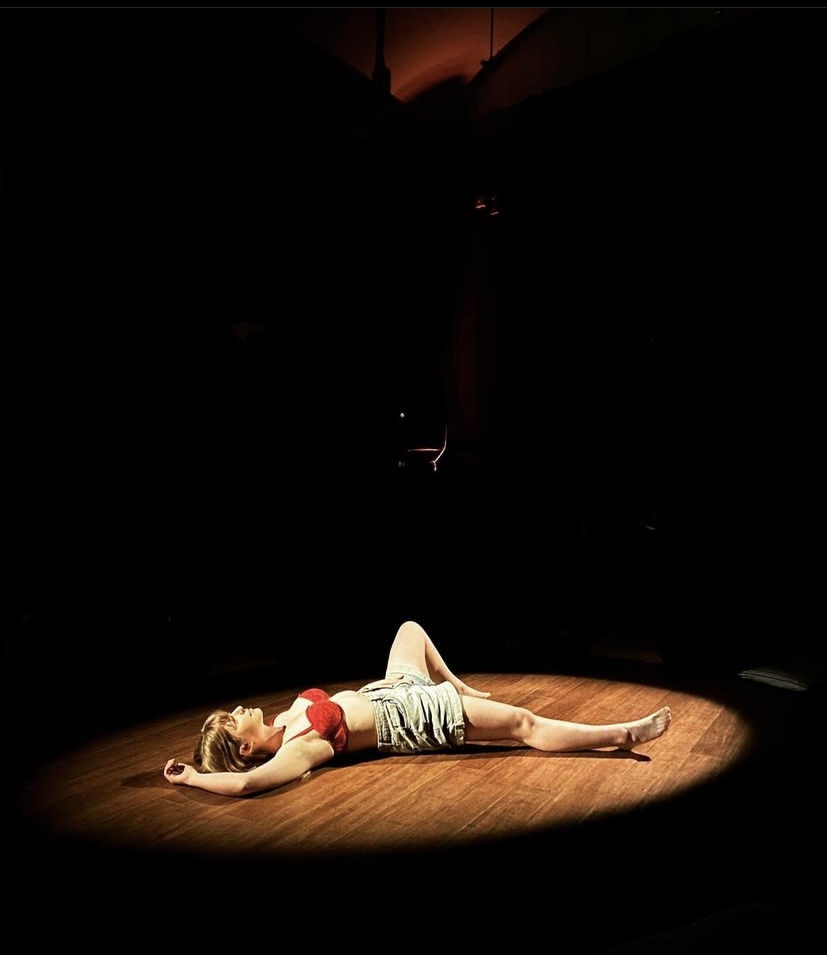 I finally got to see the show a few days later, at the Actors and it was phenomenal. We’re sat in a small dark room, some on chairs, others on cushions on the floor. A spotlight in the middle of the room, and I notice that S&M by Rihanna is playing in the background – it’s very on the nose, but in a way that’s swung round to being amusing and endearing. The conversations happening around me are about exes, lovers, and odd dating experiences. The irony of being sat in a room, about to watch a play about asexuality – and most people are talking about sex.  As the piece progresses, I watch Sasha push through each position; forcing herself through muscle strain. It’s a test of endurance. Sasha brough it up in our interview earlier: sex as exercise, the uncomfortable and exhausting thing you do because you’re supposed to. After watching her hold a ‘child’s pose’ for five minutes straight, I’d agree.

‘ACE’ is experimental, in that it knows exactly what it is, but it’s not sure what it’ll become. Kempson himself confessed he had no idea what the piece could look like a year from now. That’s the thrilling part. Each iteration of the show is informed by Sasha’s exploration of asexuality.

No eligible bachelors for me?
The Shining: A Review
Wild Rose Review
Presidetial Debate Spoofs