Music Editor, Dylan Bryant, dives deep in an interview with UK Rapper and creative powerhouse Kojey Radical ahead of the release of his debut album.

Being given the opportunity to speak with such a respected and talented artist was a privilege and as I engaged in conversation with Kojey Radical, I couldn’t help but feel like I was in the presence of someone special. Some people just ooze that ‘star quality’ and as Kojey spoke his words of wisdom, his confidence, self-belief and honesty were undeniable.

Kojey is the epitome of an artistic muse. He radiates creativity and speaks with a passion saying: “I’ve always loved art; I’ve loved art since I was a kid. I couldn’t be without art.”

Kojey first grabbed my attention with the release of ‘Cashmere Tears’ in 2019. The project is a sensational body of work that champions both his musical and lyrical ability. Kojey’s lyricism is something that sets him apart from many other artists. Speaking on the topic of honesty within his music; he said; “It’s Everything. See how to this day people still love Bob Marley. It’s because that’s honest music. So, no matter who you are, how old you are, where you are, or what’s going on in your life; you can listen to that music and connect with it. It feels like you’re just sat down in a restaurant having a conversation with it. That’s the feeling I want to put in my music.”

Kojey spoke in a calm and self-assured manner as he answered my questions, and this transcends to his views on the pressures of social media and using his platform to speak up on important subjects: “Life is pressure… Are you going to be scared of life? That’s pointless. We’re born in this world to exist and to make a difference and to contribute. In the process of that, you’re going to meet some opposition. But that’s part of it. A movie would be so boring if there was no stakes or resistance. You need resistance, it’s part of the game.”

Kojey is an artist who dips and dives into a broad pool of musical genres and when I asked him about his influences, replied: “Everyone and anyone. I’m influenced by new and old, different genres. It’s hard to pick. Exploring different genres as a kid is the first sort of musical rebellion that I remember. Going from Q-Tip and Mos Def to Jamie T and Bloc Party and then listening to Jazzanova and Nujabes. You learn to define who you are at the most intricate parts of your development and growth. That’s what happened to me. I went from one genre to the next in my headphones, listening to different worlds. When I put those headphones on, I get transported. So, depending on how I feel, or what I want to do; I allow everything to influence me.”

Kojey is an artist who believes in the importance of experimentation and he supports his ‘no boundaries’ artistic approach by saying – “I think we get one life. Filling it with as many experiences as possible is the best way to live it. Experiencing new music and new vibes is one of the simplest ways to do it. I’ve got friends to this day that I’ve met at the most random gigs that I shouldn’t have been at. I remember going to punk shows at the Old Blue Last. Finding love in the middle of a mosh pit somewhere. It’s beautiful.”

Besides music, Kojey’s interest in fashion is well documented. He was previously an illustrator at the London College of Fashion and speaking on the topic of how fashion contributes to his individual identity and artistic image said: – “Fashion, art, music – it’s the trisector. They all influence each other and go together. It’s how anybody expresses themselves. The great thing is that we have options. I’m not going to wear my ice green jacket and jeans with a pair of Jordan 1s to a punk show. I’m going to get my Dr Martens out, lace them real tight, put a helmet on and go in headfirst. That’s part of fashion and that can translate to moods. If I wake up one day and I feel like this or that; then I’m going to dress for that occasion. How I feel listening to ‘War Outside’ is very different to how I feel listening to ‘Payback (feat. Knucks)’. For ‘Payback (feat. Knucks)’ I have to look sharp because that’s the energy it brings in my head.”

Kojey is set to release his debut album ‘Reason To Smile’ on 4th March. Despite releasing previous projects, it is only now that Kojey has named a project an album and he explains his reason as “Confidence. The only thing that draws a line or creates a difference between any of my projects is intention. When I got into music, I was learning on the job. People got to see me figure it out in front of them. I didn’t know what I was going to be, how I was going to do it or why I was doing it. But I’m in it now and I’m here. But I didn’t know if I had built up enough confidence in my own sound in order to leave with one of my previous projects as an album. You have to remember that people put a mental expiry date on people’s lives. Everything had to align for it to be an album. Mentally, spiritually and sonically I’m at another level and it’s time to cement it as what it is.” 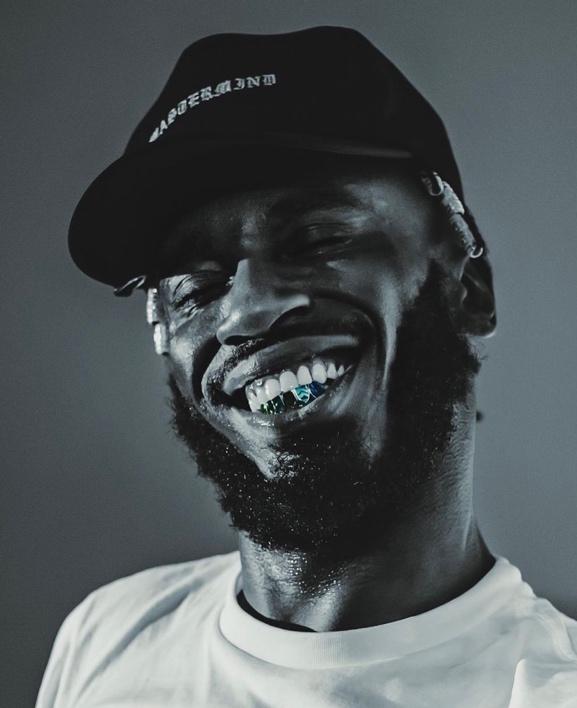 In a society that is surrounded by so much negativity, the title of Kojeys upcoming album feels extremely relevant and he describes his inspiration for the title by expressing –  “I think if ‘Cashmere Tears’ is about asking questions then ‘Reason To Smile’ is about the journey to the answers. With ‘Cashmere Tears’ I was exploring a lot of topics to do with mental health and depression and the idea of using your feelings as something to be proud of and as a luxury. But at the end of that, what do we do next? We have to go on a journey to find positive constants and pillars of strength and use them to motivate us. The journey in itself is about finding reasons to smile. But it’s deeper than that. We’re always going to be asking ourselves questions and enjoying that journey is paramount.”

It was an absolute pleasure speaking with Kojey and he finished by telling me what he hopes people can take away from his upcoming album – “I want anybody that’s been following my journey, that sees themselves within it, that feels inspired by it in any way, no matter what they do; to know that there is a win at the end of the long road. If you graft, if you put your head down, if you really want it, if you focus and walk towards it then you’re going to get there.”

Listen to a collection of Kojey’s best tracks bellow

‘Reason To Smile’ OUT 4TH MARCH

Stormzy – Blinded by his grace
Joker Review: Phoenix is on fire!
Aries Season Horoscopes
Shows That Deserved a Second Season